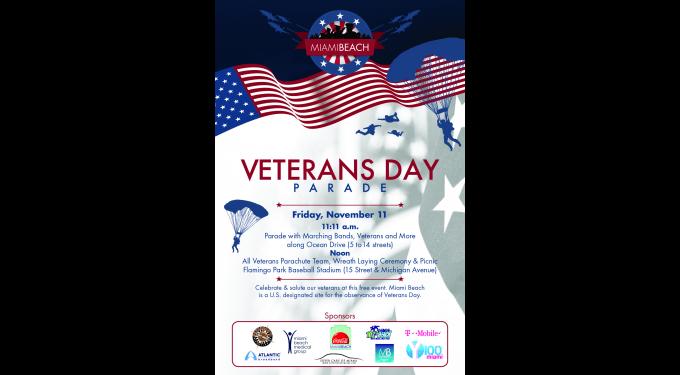 The parade begins on Washington Avenue from 17 Street to 11 Street, turning into Flamingo Park Baseball Stadium.  Willard Shepard of NBC6 serves as grand marshall and master of ceremonies. There will be exciting floats, veteran and military groups, school marching bands, cars, pageant queens, and a high-flying all veterans parachute team that will come in for a landing at Flamingo Park for a wreath laying ceremony and picnic.

The U.S. Department of Veterans Affairs has proclaimed the Miami Beach event as the official regional site for the observance of Veterans Day.

World War II Army Air Corp veterans played a major role in the history and development of Miami Beach. Miami Beach was the training grounds for air servicemen in 1940s. Many South Beach hotels were used as housing for the troops that would march and exercise on the beach, golf club, and streets on regular drills. The County Causeway was renamed the MacArthur Causeway in honor of General Douglas MacArthur. After the war, many of these veterans with “sands in their shoes” made Miami Beach their permanent home.

Bass Art Museum
Looking for a fun and educational experience within the Miami Beach area? The Bass Art...

Jungle Island
Jungle Island is an interactive zoological park, situated in the Watson Island in the Miami...

Antique Car City Tours
Venice has its gondolas, Paris its 2CVS, Rome its Fiats and now finally Miami and...

Duck Tours South Beach
Duck Tours take their "show" on the road AND on the water for a fun-filled...

Parasail Miami Beach
If you are looking to have a great beach experience than look no further than...