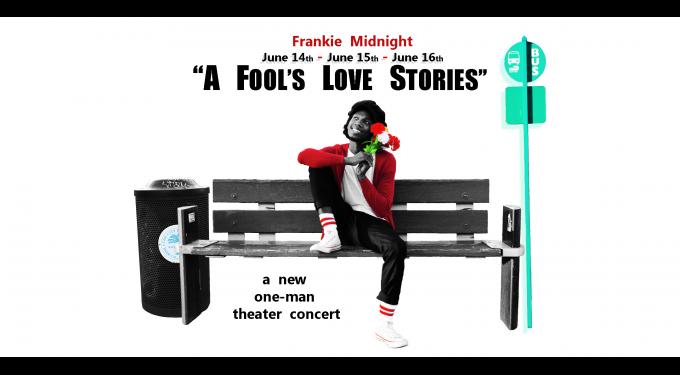 "A Fool's Love Stories" (Performance Music Theater / Humorous) A half hour, one-man theater concert written, produced and starring Frankie Midnight. Co-produced by Symone Titania of Context of a Generation LLC. Frankie Midnight's "A Fool's Love Stories" is the theater adaptation to the artist's debut Indie Pop album, "Love Stories", recorded February 14th, 2018, which humorously follows a young "sucker for love" as he reminisces on heartbreaks and love-lost from past relationships while awaiting the bus to visit his newly found love.

The Black Box theater style presentation of "A Fool's Love Stories” showcases Frankie Midnight in his purest artistry as he delivers a dynamic performance through monologue acting and piano / vocal concert / live accompaniment. The venue "H2 Studios of the Arts LLC" is the creative home base of Miami creative artist, Frankie Midnight. H2 Studios of the Arts is a recording studio and live event space, available for rent and self-produced events. Frankie Midnight is a Miami based recording, performing, and creative artist of music, stage and screen. He started his career as an actor of stage, performing in many local stage productions until he discovered music and brought his first guitar with money he made in middle school by selling candy to classmates. Shortly after he mastered the guitar, he channeled his interest in other instruments such as, bass guitar, piano, drums, percussion, harmonica, and singing. His multi-talent in musicianship has allowed him the skills to self-produce his own creative works in the form of music albums, stage plays, and cinematography. Now, he brings his music to the stage with “A Fool’s Love Stories”. Join us in a warm and intimate experience of classic entertainment accompanied with "Cafe Goodies" of Coffee / Tea / Wine & Tessa Lee's Cupcakes, followed by a brief Q&A talk back with the artist and creator himself! Showings are exclusive to a three day weekend duration and unique in seating availability.